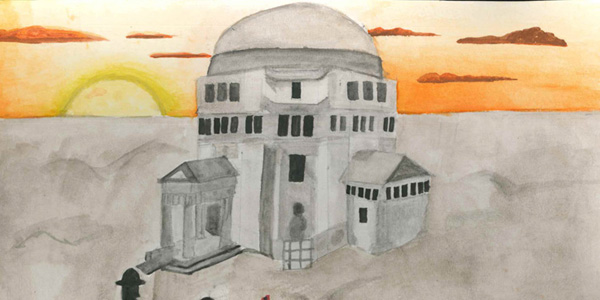 The Hall of Memory have been overjoyed at the wonderful response to the 100th Anniversary Art Competition, commemorating the end of World War 1. The thought that has been put into the pictures has really impressed the judges and it made the decision of picking the top 3 all that more difficult.

We would like to congratulate everybody that entered the competition and we hope that you enjoyed drawing our historic building and by doing so learnt a little bit more about the importance of the building and the events it commemorates.

All entries along with the winners and their accompanying descriptions are below. The judges also picked one entry for a ‘Special Mention’.

The winners have also been added to the permanent Gallery for the Hall of Memory which can be seen here: http://www.hallofmemory.co.uk/gallery.php

Once again a huge congratulations to everyone that took part.

Age - 13
School - St Edmund Campion
Description: For my Hall of Memory artwork, I used watercolour, as I like the effect that it gives, and how seamlessly it blends. My artwork is based at an abandoned war zone (in no man’s land); it portrays a few poppies that have started to grow. A silhouette of a soldier is mourning over the loss of another soldier, stood at his grave, at sunset. I believe that this represents the overall feeling of the population of Britain, mourning because someone close to them has probably lost their life during the horrific scenes of war.

The Hall of Memory is shown in the centre of this event because it is a place of reflection, where anyone can spend time comprehending the awful events of World War One.

I was also inspired by my great great grandad, Alfred Fellows, who died during World War One, and is in the Book of Memory, found at the Hall of Memory. 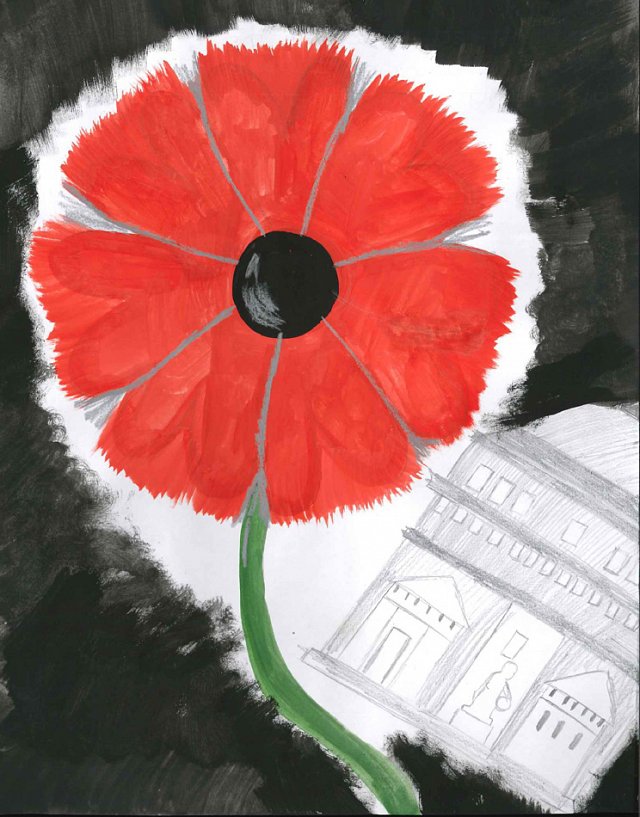 Age - 13
School - James Brindley
Description: I chose to draw a poppy to show remembrance to all of those that died in war and a picture of the Hall of memory what inspired me to draw this is a lot of people died in the war and i would like to show my appreciation to all that they done for us. 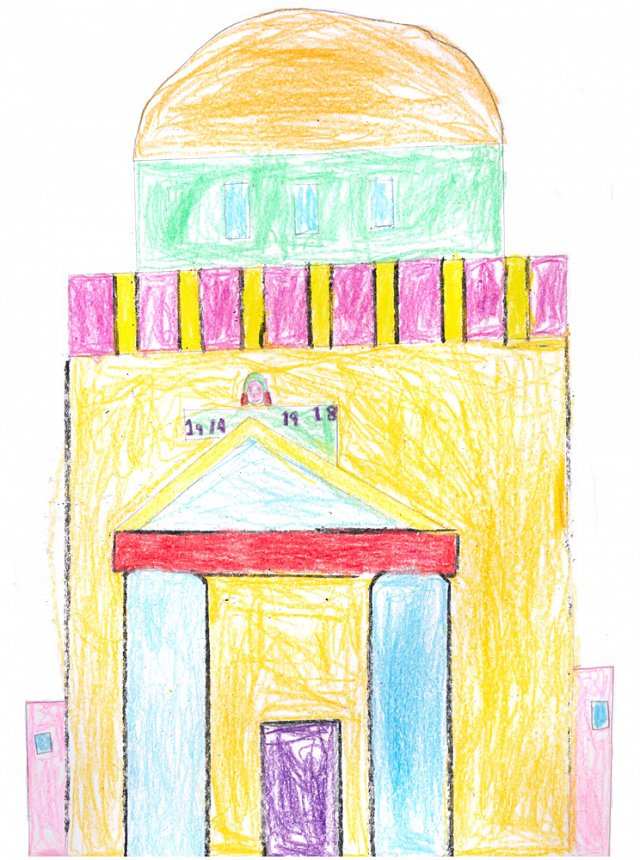 Age - 13
School - St Edmund Campion
Description: What inspired me to draw my drawing was at the age range between the boys / teenagers and men who signed up/volunteered to go to war, although, not knowing the dangers of war due to the country’s propaganda at that time. But when people were drafted and trained and sent off to join the war effort and fight in the trenches/front lines; they quickly realised that war, wasn’t as fun as it was made to be, was full of dangers, the biggest danger being…Death.

There were other dangers such as Trench foot, thats, lice and exhaustion. But the threat of death kept men on edge and on their toes (defending there country). Men also lost large amounts of sleep which meant a drop of health and stamina that let soldiers continue their duty. When boys entered the war effort; they obviously thought that it would be fun, as represented by the blue sky in the drawing. They’d got to wear a uniform and finally have a sense of belonging. The helmet being too big symbolises how young this child is.

The way i drew the uniform was that it was supposed to be big on him, due to him being a child. The sky is meant to represent the innocence of the boy and how pure he is.

Description: I drew the outside of the memorial because the statues on either corner symbolise how powerful and unnecessary every soldiers death was, the statues themselves are beautiful and should be honoured. 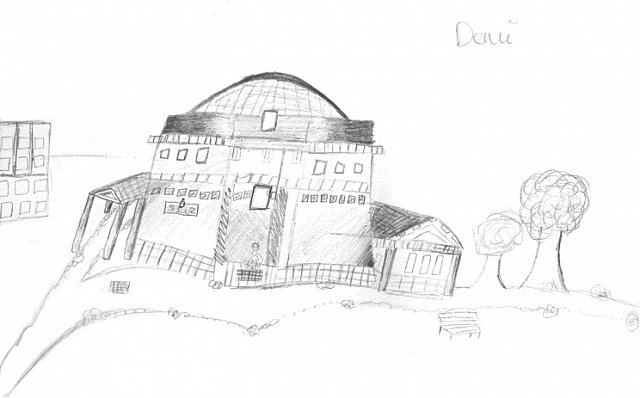 Name: Demi
Description: I drew this picture of the Hall of memory because it’s a lovely building in Birmingham. 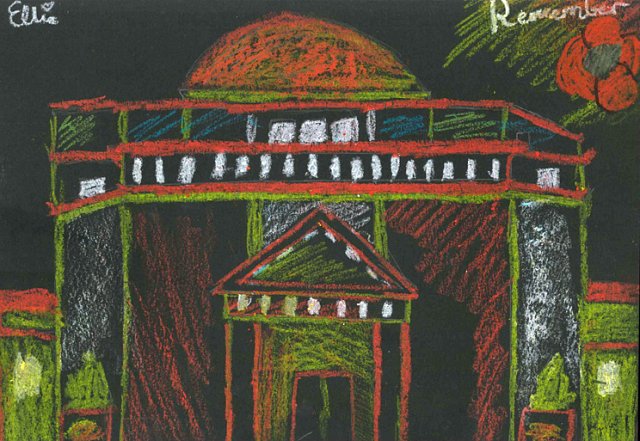 Name: Ellie Harrison
Age - 11
Description: This is my version of the Hall of Memory, I attempted to create it as abstract as i could. In this I have used, yellow, orange, red, blue, green and white oil pastels. i shaded most things in abstract colours. 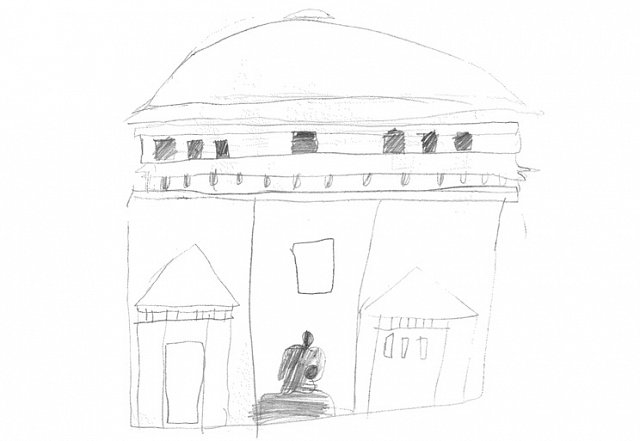 Name: Faith Mallory
Description: I drew the Hall of memory, I drew the front part because it was easy. 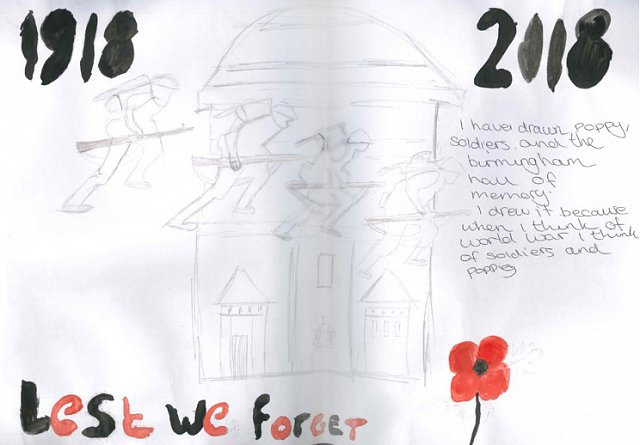 Name: Jackson Birch
Age - 13
School - james Brindley, Northfield
Description: My school is James Brindley Northfield. I drew the Hall of memory. I chose this because I like the way the building looks. 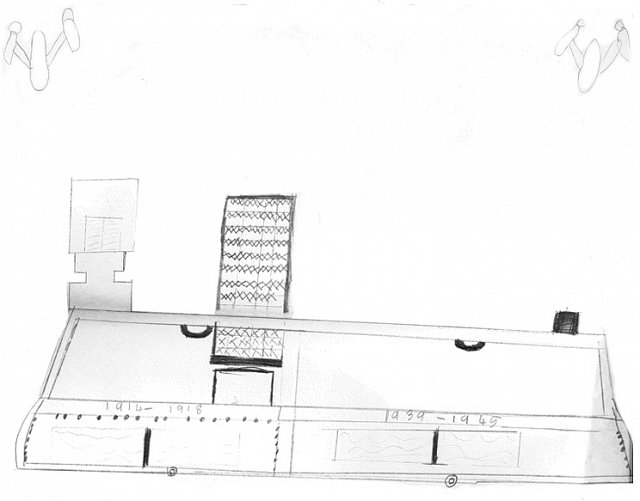 Name: Karla Rich
Age - 13
School - James Brindley
Description: I drawed the books with the names of the soldiers who fighted in the war. I think this is really nice because I love my history and it a memory of all the soldiers and if you look there is another book in the background and that’s the book of the children who died in the war. 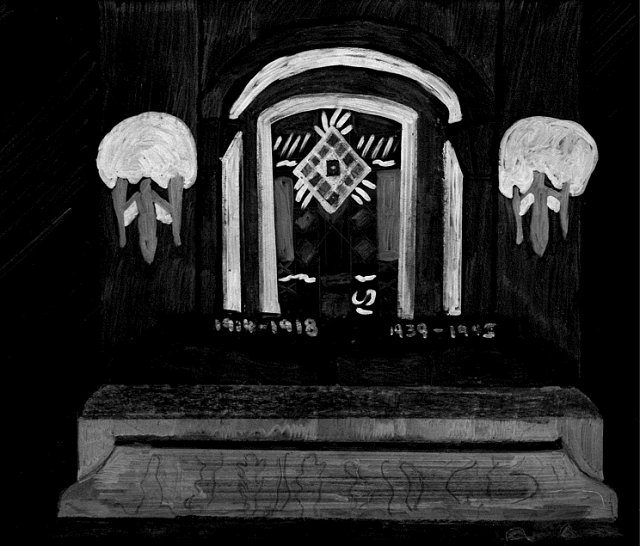 Name: Kyron Samuels Brown
Age - 12
School - James Brindley School
Description: My picture is a view of the inside of the Hall of Memory in Birmingham. I really liked the gold altar with the books, to show all of the soldiers who have lost their lives fighting in wars. This was my copy of that view, using gold, silver and white pens on black card.

Name: Lara Watkins
Age - 12
School - James Brindley School
Description: This is my copy of the years when the World War started. it is apart of the Birmingham Hall of Memory. I have used great pencil shades in this picture. 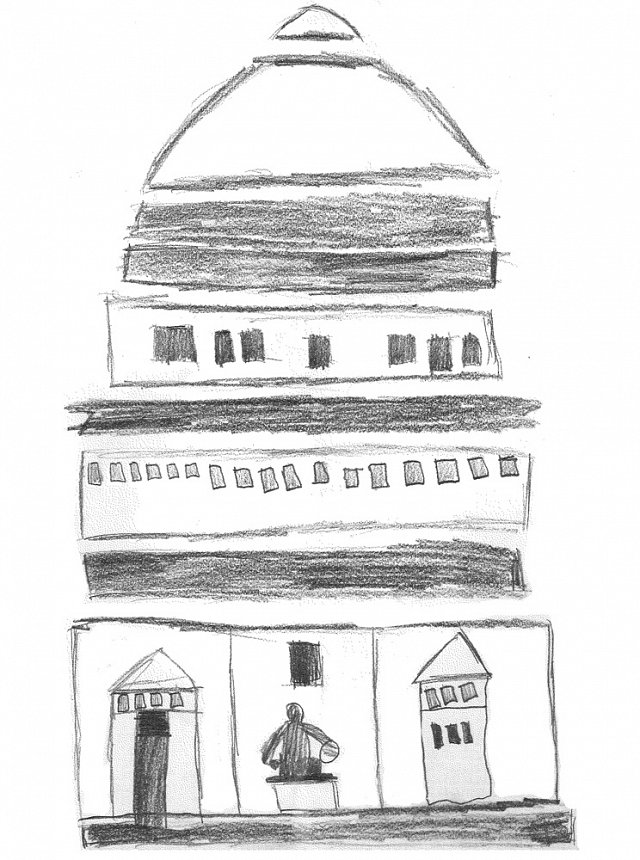 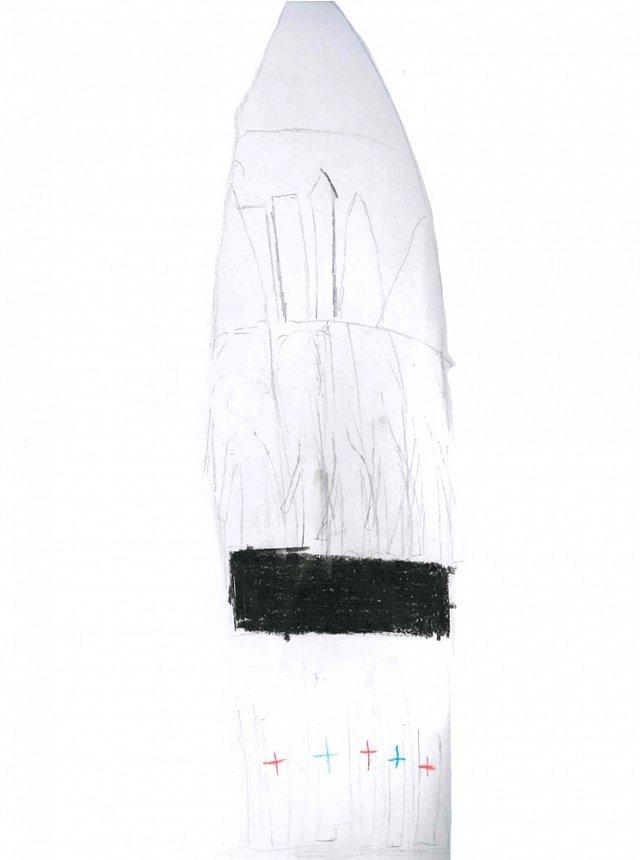 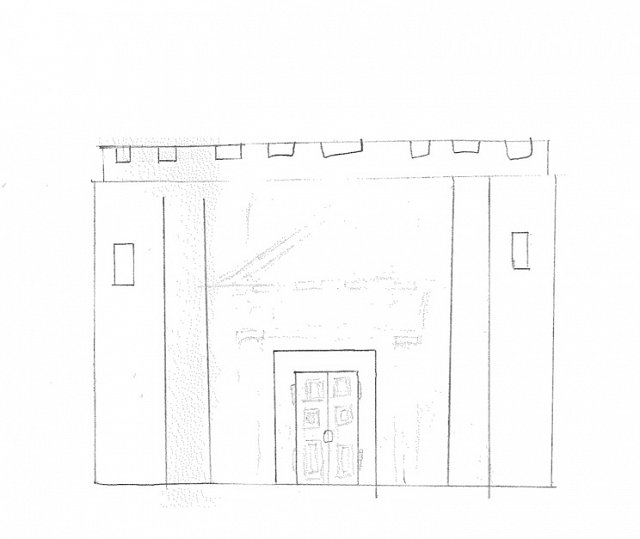 Name: Oglan
Age - 12
Description: I drew this because it is to show that the building will always be strong and respected in our hearts and souls.

Name: Olivia Raepugh
Age - 12
School - James Brindley School
Description: I drew a picture of the Hall of Memory because it reminds me of all the wonderful soldiers that fought for our country. I drew poppies to represent the blood of out fallen soldiers and i wrote the words ‘We will remember’ because we will never forget their courage, bravery and selflessness. I used pencil to draw the picture and wax crayon to colour in the letters so that the picture stood out. I used pencil crayon to colour in the poppies. 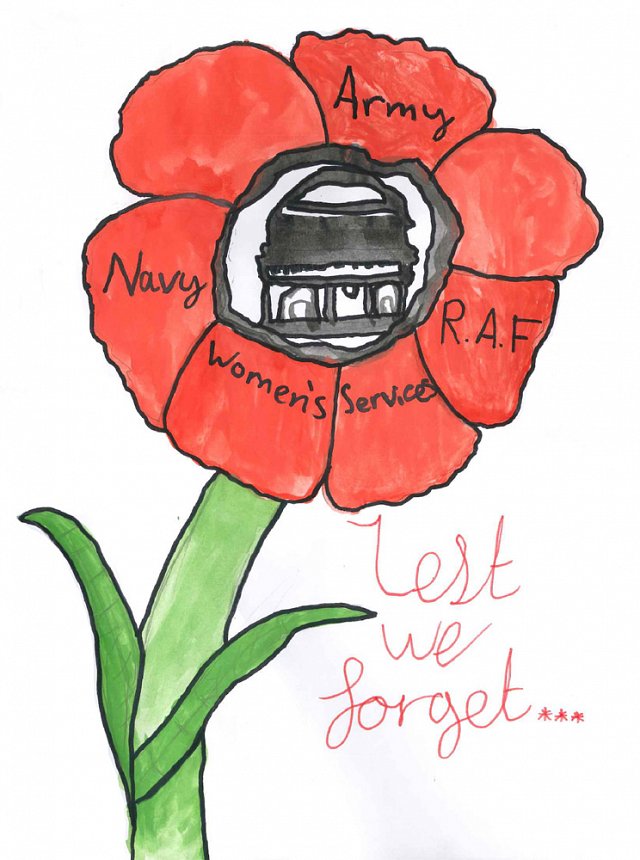 Name: Ruby Paul-Baig
Age - 12
School - James Brindley KS3, Northfield
Description: What inspired me to do this was the memory of all the fallen and survived soldiers who risked their lives to serve our country and protect us from the enemy. 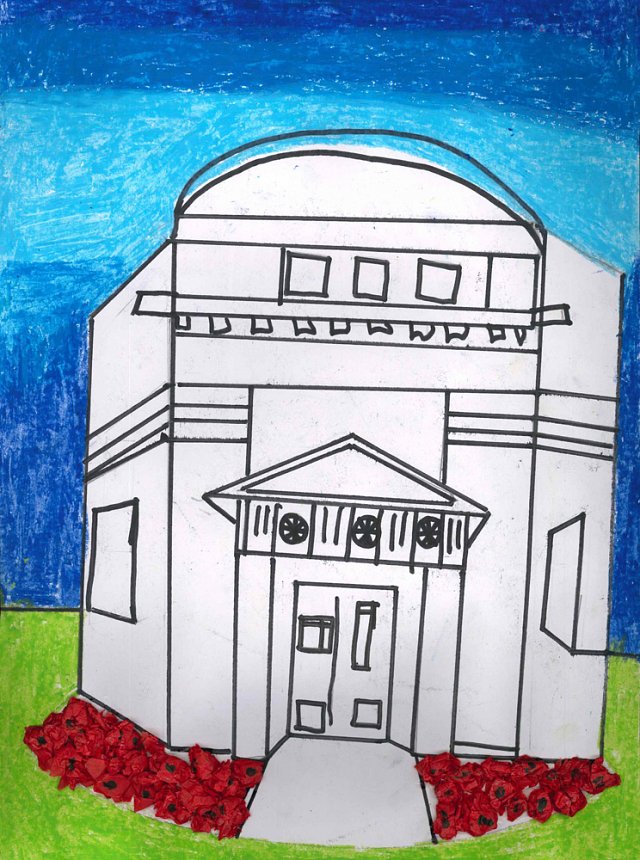 Name: Saniya Sajjad Ali
Age - 13
School - James Brindley School
Description: This is my own copy of the Hall of Memory, looking at the front of the building. I have used oil pastels, blending colours to create tones for the skin, then I used different kinds of tones of blue for the sky and green for the grass and ground and i used red tissue paper to create poppies and put black pen in the middle.